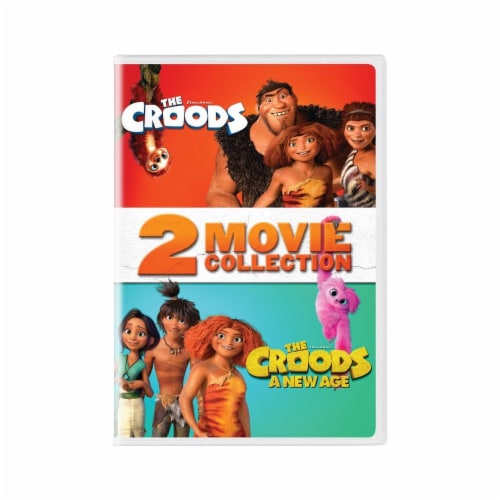 Includes both The Croods and The Croods: A New Age on DVD

The Croods (2013) Prehistoric family the Croods live in a particularly dangerous moment in time. Patriarch Grug (Nicolas Cage), his mate, Ugga (Catherine Keener), teenage daughter Eep (Emma Stone), son Thunk (Clark Duke) and feisty Gran (Cloris Leachman) gather food by day and huddle together in a cave at night. When a more evolved caveman named Guy (Ryan Reynolds) arrives on the scene, Grug is distrustful, but it soon becomes apparent that Guy is correct about the impending destruction of their world.

The Croods: A New Age (2020) Searching for a safer habitat, the prehistoric Crood family discovers an idyllic, walled-in paradise that meets all of its needs. Unfortunately, they must also learn to live with the Bettermans -- a family that's a couple of steps above the Croods on the evolutionary ladder. As tensions between the new neighbors start to rise, a new threat soon propels both clans on an epic adventure that forces them to embrace their differences, draw strength from one another, and survive together.