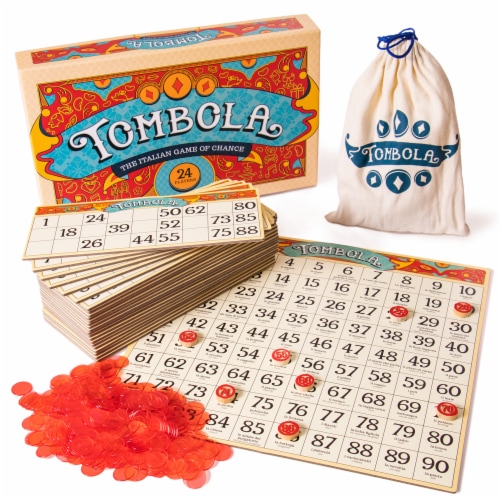 The Italian Game of Chance

Tombola is the traditional Italian game of chance loved by generations and cherished by families during the holidays. The origin dates as far back as four centuries ago in Naples, when gambling was popular among the citizens but was frowned upon by the church. Thus, a new way to play the lottery at home in secret was invented! And this game (think Bingo with more chances to win, more rounds, and more hilarity!)

How to Play Tombola

The game is played over five rounds. Over the course of a round, the tombolone will draw a number an announce it. If a player has that number, they cover it on their board. Each round will have players attempting to fill a certain number of spaces on their card, then calling out a special (and in some cases ridiculous) word! You'll find the Italian word or phrase and an English translation on each space.

Play with up to 24 people at once; enough cards for the whole famiglia! Includes 24 double-sided cards, 360 chips, a tabellone (calling board), and tombolini tiles numbered 1-90 in a storage pouch.

Tombola, while traditionally played during holidays and festivals, is a classic party game that can be played during any occasion (or lack thereof). Have a big group of friends and family over? Pull out Tombola, but don't forget the prizes! There are five rounds to this game with five separate chances to win, some will even attach a prize to each round to add to the fun. This game makes a great alternative to Bingo and lottery-style game. It's great for Bingo halls, bars, game stores, schools, Christmas parties, corporate events, living facilities & home use!