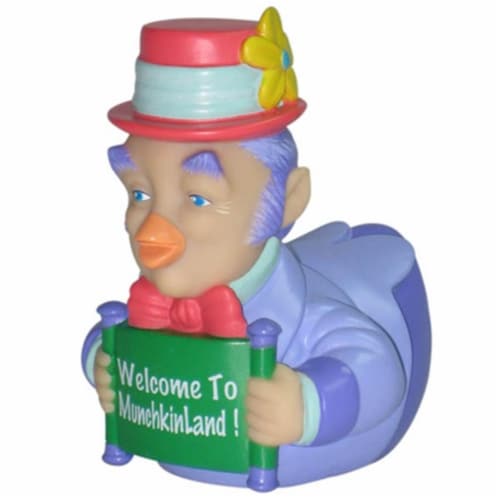 CelebriDucks 81056 Munchkin from The Wizard of Oz Rubber Duck

Munchkins are the natives of the fictional Munchkin Country in the Oz books by L. Frank Baum. They first appeared in the 1900 novel The Wonderful Wizard of Oz, in which they are described as being somewhat short of stature, and wear only blue. Later books never note anything unusual about Munchkin height but emphasize the color preference.

CelebriDucks are the creators of the first ever celebrity rubber ducks of the greatest icons of film, music, athletics and history. The detail in their sculpting and painting is just amazing and they are considered one of the top custom duck manufacturers in the world. The rubber duck industry was actually invented in America before the whole industry went overseas. CelebriDucks is the only company doing all their artwork and sculpting in the USA and now even make some styles 100% in America. CelebriDucks has produced ducks for the NBA, Major League Baseball, the NHL, Collegiate Mascots, NASCAR, The House of Blues, Caesars Casino, and the Jimmy Buffet Margaret ville cafes. The company has pioneered a whole new collectible and to date their ducks have appeared on hundreds of media outlets including The Tonight Show, CBS Evening Magazine, Late Night with Conan O’Brien, CNN, etc. CelebriDucks were voted one of the top 100 gifts by Entertainment Weekly.