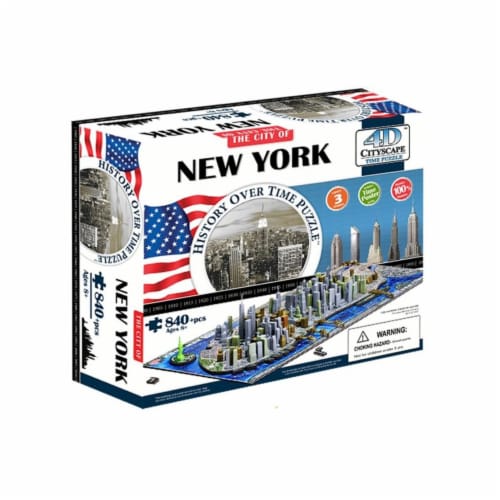 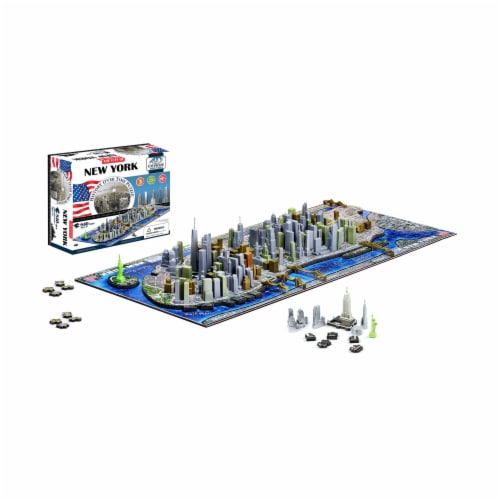 Hover to Zoom
Item 1 of 2 is selected.

This incredible 4D Cityscape puzzle recreates Manhattan's famous skyline not only in three dimensions, using scale-model buildings, but also along the axis of fourth dimension time; spanning 101 years of its architectural history. The puzzle includes 126 plastic buildings that depict the city as it appeared as far back as 1812 through to 1971 with the addition of the World Trade Towers, and into the future in 2013 with the completion of the Freedom Tower and includes such iconic structures as the Statue of Liberty, the United Nations and the Empire State Building. The base of the puzzle unit is a traditional 2D jigsaw puzzle composed of 640 pieces that form the city's street layout and islands; the streets glow in the dark, emphasizing the city's insomnia nickname. During the process of constructing the base map, one learns about New York City's neighborhoods, streets, museums, art galleries and more. Once the puzzle base is complete, the vertical building of New York begins by installing replications of 126 buildings and skyscrapers in chronological sequence. This is done by matching the illustration and the building number from an enclosed spiral-bound booklet (which details the history of each building) to an actual plastic building replica piece. Once you have completed the puzzle, be sure to take advantage of the special online educational feature that includes more than 2000 facts! Assembled puzzle measures: 28 Inch x 12 Inch x 4 Inch.